Signs That a Relative is Financially Abusing Elderly Family Members

Signs That a Relative is Financially Abusing Elderly Family Members

Elderly people are incredibly vulnerable to financial fraud. They are prime victims of scams and various types of fraud around the world. Unfortunately, the people looking to take advantage of your elderly relatives are not from outside alone. Instead, even people from inside their families are looking to exploit them.

So if you are suspicious of something going wrong, but have no proof, here are a few signs to look out for.

Elderly Family Members Have Their Children Take Care of Finances

Furthermore, if you start to notice money move from their bank to another often, it could be a red flag. It can be especially suspicious if the account is one that they have no control over.

They Are Not Aware Of Their Current Financial Situation

If a senior does not have dementia but is still not aware of their finances, then it is cause for concern. That is especially the case if they are evasive when talking about their finances or refer to their children. While it is certainly not wrong for a child to look after their parent’s financials, keeping one’s parents out of the loop is certainly suspicious.

A good habit for anyone looking after an elderly relative is to check their monthly financials. If you know that someone else handles their finances but you see many withdrawals be sure to ask them about it.

“When an elderly relative asks a younger person to handle their finances, they are at risk of exploitation.”

If the senior is aware of the transactions, then the chances are that everything is fine. But if they don’t have an answer, this could be a sign that someone is exploiting them. By simply checking their credit card bills and bank statements, you can tell that something is off.

The relative is staying with the potentially exploited senior

Finally, the last sign that a relative is potentially taking advantage of an elderly person is that they happen to live with them. That is usually the case with children who live with their parents well into adulthood. If they do not have a job but are still living a lavish lifestyle, then the chances are that they are exploiting their elderly parent.

When an elderly relative asks a younger person to handle their finances, they are at risk of exploitation. 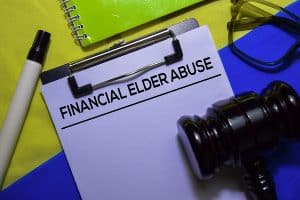 It can be tough to face the possibility that your elderly relatives might be victims of financial exploitation. But if you can gather necessary evidence, you can criminally charge the exploiter and even freeze the account. Be sure to keep the senior in question informed about the steps that you are taking.

Lyle Solomon has considerable litigation experience as well as substantial hands-on knowledge and expertise in legal analysis and writing. Since 2003, he has been a member of the State Bar of California. In 1998, he graduated from the University of the Pacific’s McGeorge School of Law in Sacramento, California, and now serves as a principal attorney for the Oak View Law Group in Rocklin, California.