The Perils and Joys of Pet Downsizing

I was devastated when our seventeen-year-old poodle died a year ago, but my husband Tim and I decided Muffy would be our last dog. When our children left home, our sweet pup filled our empty nest with furry responsibility. Now, for the first time in almost forty years, we were truly alone. No dogs, no kids. I surprised myself with how readily I accepted my new dogless arrangement. Without Muffy in my life, nothing stood in the way of travel and unlimited hours of errands without worrying about getting home to “let the dog out.” While I loved Muffy, the freedom was intoxicating.

“As we walked to the cashier, squeals rose from the cardboard box containing our newest family member.”

I was bearing up under the grief when, a few weeks after Muffy’s passing, I found a few pamphlets from pet shops strategically placed around my house. On the covers, pictures of sweet-faced Syrian hamsters stared back at me, with the merits of ownership, and detailed care and feeding tips inside. I suspected who the culprit was, and my suspicions were confirmed when our granddaughter Molly said, “Mami, I know how much you miss Muffy. You need a hamster!” I knew her mother had said ‘no’ when Molly lobbied her for a rodent, so it was no surprise I was the next target. As part of the indoctrination, my I-phone filled with text messages containing links to the MSPCA’s adoption site, with instructions to click on “Fuzzy and Buzzy.” I appreciated her resolve, but I said, “No, Molls, Papa and I are all set. We are not getting a hamster.”

Nevertheless, Molly continued the campaign for rodent ownership and two months later, I succumbed to the pressure. Since we live next door, she pledged to take care of the hamster every day. While I doubted her genuine commitment, on a frigid Friday evening in March, Molly and I made our way to a local pet shop where two hammies were cuddled up together in the glass enclosure. We chose the one with white and light brown markings. Molly had already chosen the name: Biscuit. It suited her.

As we walked to the cashier, squeals rose from the cardboard box containing our newest family member. I asked Rebecca, the salesgirl, “Is this normal?” She assured me that some hamsters occasionally do scream when nervous. I had to ask the obvious next question, “Will she always scream?” She answered, “She might…”  I gave Molly a look. She shrugged and half-smiled. I wondered what I was getting into. 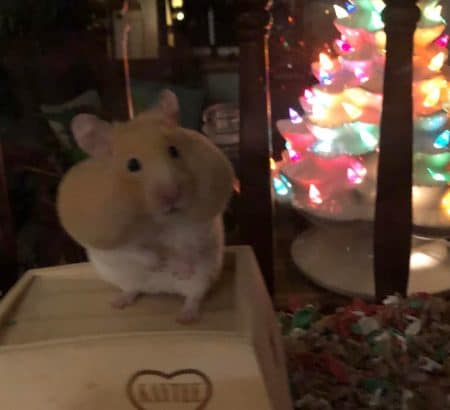 By the time we arrived home, one hundred and twenty-five dollars and a bag of hamster food, bedding, toys, and treats later, the screaming had stopped. We released Biscuit into her ten-gallon glass tank. As she pranced around exploring her new surroundings, Molly beamed. Under the guise of repairing Mami’s broken heart, she had secured herself a new pet. I remember those uncomplicated, happy hours fondly.

Tim and I became full-time hamster parents. We found ourselves frequently cleaning Biscuit’s cage to keep odors at bay, that is until I researched the idea of a “sand bath,” a hammy litter box. I had barely added the turquoise, cat-shaped capsule to the cage when Bis hopped in, raised her little tail, and peed. The investment was a bargain at fifteen dollars (plus sand). I could see we had a rodent genius on our hands.

Soon after, Biscuit’s level of activity, which, unless she was sleeping, was non-stop, required a larger living space, forcing us to graduate to a twenty-gallon tank. The forty-dollar contraption became the centerpiece of our kitchen. Still, more space didn’t solve our problems with our overactive pet. While Bissy slept all day, she awakened at seven each evening and demanded attention. She loves human interaction and is happiest when she is out and about the house in her exercise ball (ten dollars). We block off the stairways and let her roam. She knows the floorplan by heart, speeding up on long stretches of the hallway, seamlessly turning into dens and bathrooms without pausing to get her bearings.

Even having the run of the house wasn’t enough for this four-ounce troublemaker. Next, I invested in a playpen. For a while, Biscuit seemed happy to play with her see-saw, jungle gym, and additional house ($50 in total) but soon things went pear-shaped as Biscuit walked by us on the floor in the den. She had found a way to escape, and we knew, once she figured something out, it is etched in her repertoire of terror forever.

You may wonder where Molly is in all this excitement. She drops in occasionally during the evening mayhem. When she asks to wake Biscuit during the day, her Papa and I bellow “NO!” in unison. Once the hamster is awake, there’s no dealing with her. Bissy pleads, short arms and tiny paws pressing against the glass, to be released. Every evening, we pray she stays asleep until we are ready to deal with her. At times, we sound like new parents with a colicky baby. Seeing how frantic we were during one of our Biscuit panic moments, Molly apologized, saying, “I’m sorry, Mami. I had no idea we were signing on to a high-maintenance hamster.”

Last night, Biscuit took off in her ball about the house on her nightly constitutional. When I hadn’t seen her for a while, I went to find her. I ran from room to room scanning the floor, calling to her like a lunatic who expected the hamster would answer. As I turned the corner into the bedroom, a tiny, furry bum protruded from the radiator. (Don’t worry! It wasn’t on.) I pried her from her situation and continued my search for the exercise ball, all the while berating the tiny monster. I found the ball in another room, the cover popped off. It wasn’t Bissy’s first time figuring out how to escape the ball (we are now on our third ball), but it was the first time the little scamp made a run for it and succeeded.

Going from a dog to a hamster is a unique form of downsizing. Our attachment and affection for our miniature tyrant surprise us. But maybe Molly was right. Maybe we did need a distraction and a little excitement in our lives. The lifespan of a hamster is only a few years so we know we will be empty nesters once again, sooner versus later. I already ask myself, will I do it again? Sign on to a needy, adorable, four-ounce crazy furball? The jury in the case of Mami and Papa versus Hamster Parenthood is still out. In the meantime, we are off to buy another exercise ball, one that has a padlock. 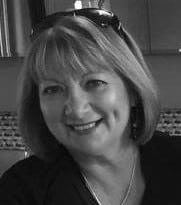 Marie F. Cahalane, a lifelong Bostonian, is a writer, an educator, an entrepreneur, and most importantly, her grandchildren’s Mami. Her blog, mamiknowseverything.com, is her passion and her essays have been published in HerStry, Medium, and Passager Books Pandemic Diaries. She is currently pursuing an MFA in Creative Nonfiction and dedicates her free time to her work-in-progress, a memoir of her challenging relationship with her father, a serial hoarder.

Read more about pets in GRAND