According to an article in Independent.com UK, “Ukrainian children and grandmothers are preparing for a potential Russian invasion by practicing how to handle guns.

Tensions continue to grow as Russia has amassed tens of thousands of troops along the Ukraine border despite diplomatic efforts to prevent a potentially deadly conflict.

Ukrainians appear to be preparing themselves for the worst, regardless of their age or military experience.

One 79-year-old great-grandmother even took part in civilian combat training in Mariupol, eastern Ukraine, on Sunday.

Valentyna Konstantynovska was taught how to use an AK-47 rifle by the country’s national guard.”

“I will do this because I think I’m ready for it. I don’t want to lose my country, my city.” 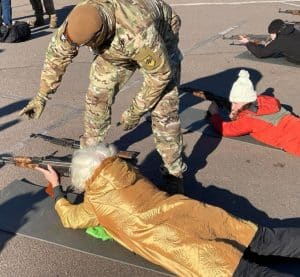 But Ms Konstantynovska admitted: “I underwent this training but I probably won’t be a valid soldier because my body doesn’t serve me that much anymore. And the weapon is too heavy for me.” Some local residents even brought their children with them to learn how to load ammunition.

It was the first time that safety and training were offered to the city which has been in conflict for eight years. Russia has been building troops at the Ukrainian border and has been performing military exercises with Belarus.

Read more in GRAND how grandmothers protect their grandchildren