We arrived at our son and daughter-in-law’s home in rural Connecticut late last night and are now asleep in our five-year-old grandson’s playroom. K has tiptoed down the two flights of stairs from his room and is crouched on the floor beside our pull-out bed. He sits, quiet as a mouse, waiting for signs of life from us. It is around 6 a.m., which is, let’s just note, 3 a.m. Seattle time.  Although he doesn’t make a sound, I sense his presence and struggle to momentarily open one eye, signaling him to climb in and snuggle. He wants to situate himself between the two of us, so he carefully pats up and down the quilt to see where my legs are, and then clambers over me. I stretch down to warm his frozen little toes with my hands, slipping back to sleep.

I haven’t registered that he holds an iPad Mini in one hand until I am startled back awake by gleeful cackles. He has deployed what I have since learned is the Photo Booth App. I wearily open my eyes. With the greatest delight he shows me what he has captured: a series of photos of me with my pillow-wrinkled face, puffy semi-opened eyes, and hair sticking out on end. 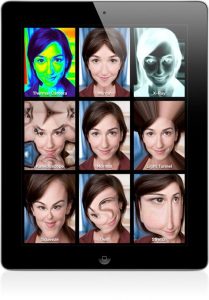 To make things even worse he has used the app to “enhance” me, so the screen features an elongated and magnified version of my wrinkled neck with half of my face stretched wildly out of proportion. He has created several of these photos, each with different imaginative alterations. Waking up to science fiction monster images of myself is not a morale booster. K, on the other hand, is a picture of irrepressible delight. His skinny little body squirms with giggles and his brown Bengali eyes, enormous in his small face, twinkle with fun. He is having a wonderful time, and I am just thankful that he doesn’t know how to post on social  media…yet.  Days later, back home in Seattle, we receive this photo— unbeknownst to us, our son had slipped in and captured the moment. 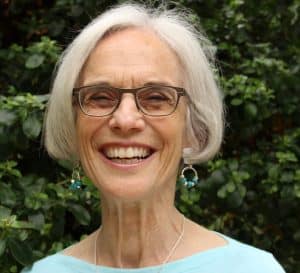 Carolyn Cohen, a native Northwesterner, lives in Seattle, WA. She is figuring out her post-retirement identity and, in the meantime, enjoys time with family and friends, gardening, and relentless political advocacy.