Posted on October 27, 2022 by Christine Crosby in Halloween, hauntings, supernatural

It’s almost Halloween and I am once more contemplating the supernatural. I have always been curious yet skeptical of what may be very real to some people. Every country and culture has similar versions of superstitions, ghost and witch tales, beliefs about life and death influenced by religion as well as pagan dogma. The old Celtic festivals, when people lighted bonfires and wore costumes to banish ghosts and evil spirits, led to Halloween traditions in Europe and followed to our shores.

“However, I heard my share of superstitious stories mainly from my mother and my brother and I certainly did the bed sheet over our heads routine to scare each other.”

I never saw a ghost and never hope to see one but I have an open mind. I respect anyone who claims to have encountered one or “felt” a presence just as I respect those who might consider all of this pure nonsense and don’t care to participate in something like Halloween for their own personal beliefs. I have known very intelligent and yes, even religious people, who still are very open to certain supernatural events. I am one of those skeptics though who would have to actually experience something out of the ordinary to truly believe.

Most of us recall telling or listening to ghost stories when we were young. Strange how so many still get a thrill out of watching scary movies or going to haunted houses on Halloween. Perhaps it is a harmless distraction from the very real and more daunting issues in life. For some of us there is enough anxiety facing us every day that we open our doors to face the world and our jobs without concerning ourselves with personal superstitions, daily horoscopes, ghosts, witches, and (for those who get a kick out of this), any vampires and zombies lurking around. I especially don’t understand the last two and I am sure none of us will ever run into any of them.

I won’t get into claims of a parallel universe because I would be totally out of my element in describing the concept but, from what I have listened to others on the subject, I am not quite buying the theory either.  Still…who knows. There is always a “what if” and I am willing to sound foolish by sharing certain experiences, though there has not been any major experience in the supernatural realm for me.

I have made a few observations though and even went on one ghost quest which proved to be very disappointing. Here are some personal thoughts on ghosts and the afterlife as I don’t know too much about so-called witches and other things that go bump in the night…not that I am an expert about ghosts or the afterlife for that matter. I confess though that I have imagined in years past, while sitting alone on my patio, having conversations with my deceased parents when I was troubled about something. They certainly were NOT actually present in any form and unfortunately, they did not convey any encouragement, offer help, or give a sign for me.

“I asked her who she was talking to and she told me and then seriously looked straight at me and said: “she’s right behind you!”….Holy smokes! I felt a shiver.”

I did not go trick or treating on Halloween much as a child because I lived in the country. However, I heard my share of superstitious stories mainly from my mother and my brother and I certainly did the bed sheet over our heads routine to scare each other. I am sure we got some of that nonsense from our father, as he enjoyed everything in the spooky or supernatural realm.

We thought for a while that the Fulton Mansion, near where my family owned a vacation home on the coastal bend of Texas, was haunted for sure and Dad threatened to take my oldest son there when he was misbehaving.  For a while, the mansion did indeed look haunted due to neglect in those years. I personally never found anything out of the ordinary in any home where I have lived but all of our homes were newly constructed.

I have talked with at least one other person who said she lived in several 100-year-old homes and claimed that she felt the presence of friendly “ghosts.” On our street a few years ago a rumor spread that a family had moved out of a house claiming it was haunted. Supposedly their maid told them this and they promptly moved out! The house was vacant for some time and one day a neighbor told me that she and another neighbor, who was in real estate, we’re going to check out the interior so I went along. We went in expecting all kinds of eerie and creepy things to occur but it never did. Eventually, the realtor moved into that very same house and claimed that it was not haunted.  I asked her if it were true that, if a violent death occurred within a home that was for sale, the real estate agent had to divulge this to clients. According to her, that is very true. I suppose that it is silly but I would NEVER move into a home where anything of a horrific nature had happened and  I wouldn’t have moved into that one just to be on the safe side.

Years ago a son and his wife and young daughter moved into our home after moving back to Texas from another state. In a few months, they moved into a relatively new home which had at least one previous owner. We were there one night in the empty house before the move when my granddaughter went into the room that would be her bedroom and closed the door. As I listened at the door I could hear her talking. I did not find this strange since kids (and sometimes adults) talk to themselves and I figured she was just playing…..even if it sounded more like a conversation! She came out and I followed her through the hall and into the living room. I asked her who she was talking to and she told me and then seriously looked straight at me and said: “she’s right behind you!”….Holy smokes! I felt a shiver.

“Aren’t there any happy ghosts?”

Her Mom told me that it was just one of her imaginary friends which is quite normal. I understand that as many young children have imaginary friends, but never did I recall her talking to them in my home when they lived with us.  It made me think of what a sissy I was and how I really liked the movie The Six Sense but, to this very day, I can’t watch it alone as I find it intriguing but upsetting. Though I thought the movie was well done, I could never figure out why the little kid couldn’t have had at least some encounters with spirits who had not had such awful lives. Aren’t there any happy ghosts?

The only phenomena that I have experienced or heard others experience I attribute to some of the grief process. That is when we see someone who looks like or has similar features to a recently departed loved one. It is almost like a comforting feeling that, just perhaps, their spirit is still here and they are going about their activities keeping a watch over us. Some believe in angels….maybe they are what we are seeing but I am still skeptical. I have decided that I will do an experiment. I plan to talk with a close relative and make a pact with him about us moving a very special object in our residences when either one of us dies. That way, if he dies first, I will know that maybe a spirit hangs around a while and perhaps we should not fear death or what comes after.

All I do believe is that fear is often not related to something that is real and is a much more complex issue. We need some of it in our lives, of course, to protect ourselves from real danger. For me, I have always carried in my wallet a quote given to me many years ago by someone who helps people with anxiety issues. I wish that I could give credit to the person who wrote it but the author is unknown to me. “FEAR: False Evidence Appearing Real.” Happy Halloween!

To read more from Sherrill 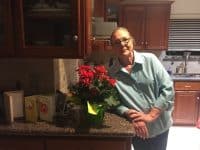