How Shaquille O’Neal Reinvented Himself After Retirement

Shaquille O’Neal has been retired since 2011 but remains very relevant as he has reinvented himself, conquering the world of business while still a regular in the media.

The former NBA center has been on the panel of TNT’s popular basketball show Inside the NBA since retirement and also has a weekly podcast.

“…unlike most former stars who struggle to maintain their wealth post-retirement and go bankrupt, the Hall of Famer has seen his value increase in the wake of his playing career.”

O’Neal, who goes by the nickname Shaq, probably doesn’t need to work. He earned over $300 million during his playing career but, unlike most former stars who struggle to maintain their wealth post-retirement and go bankrupt, the Hall of Famer has seen his value increase in the wake of his playing career.

Shaq is earning more than the $30 million he made a year in the NBA, having fashioned some solid investments in tech, restaurants, and other businesses. He has also locked down some very lucrative endorsement deals.

The 50-year-old was drafted as 1992’s No.1 overall pick out of LSU by the Orlando Magic, where he experienced relative success. He would become a true NBA superstar after joining the Los Angeles Lakers in 1996. He won three of his four titles alongside Kobe Bryant in L.A but the pair were hardly able to get along and that they were able to win multiple championships together is remarkable in itself.

In 2004, O’Neal was traded to the Miami Heat, where he won his fourth ring, playing alongside Dwyane Wade. Apart from his legacy as a four-time champ, Shaq is also a three-time NBA Finals MVP, one-time regular season MVP, eight-time All-NBA First Team feature, 15-time All-Star, and two-time scoring champion. He won many more personal accolades during his time in the NBA.

His career took a dip following the championship year with Miami and he moved to the Phoenix Suns in 2008, heading to Cleveland to play with the Cavaliers before signing with the Boston Celtics. Shaq admits he felt bad taking the Celtics’ money for limited production, so he decided to hang it up whilst there.

“Because one thing I am with myself, I’m honest. I’m Shaq, but I’m not Shaq,” he said a few years ago. “Shaq is not Shaq when he’s averaging seven, eight, nine points (per game). That’s not Shaq. I can still entertain and do stuff to make people giggle, but that’s not Shaq. I’m robbing the people. I’m robbing the Celtics. ‘You’re only paying me a million (dollars). I don’t feel right. I’m not coming back. Here’s your money back, sir. Thank you very much.’ ”

The Celtics, who made it to the finals last season, might have a hard time doing so again because of the situation with head coach Ime Udoka, so it will be interesting to see how fans using Massachusetts Sports Betting Apps make their punts when betting becomes legal in the state early next year.

Meanwhile, Shaq has continued to thrive on the back of his playing days. He was one of the most recognizable faces in sports back then, even landing roles in several movies and dropping rap albums. But now, he’s one of the more popular businessmen in the media.

The brand ambassador deal earns him several million a year.

The former NBA superstar was a minority owner of the Sacramento Kings from 2013-2022; he sold his stake in the team this year. In 2019, he joined the board of directors of Papa John’s investing in nine Atlanta stores and becoming the spokesperson for the pizza franchise. The brand ambassador deal earns him several million a year. 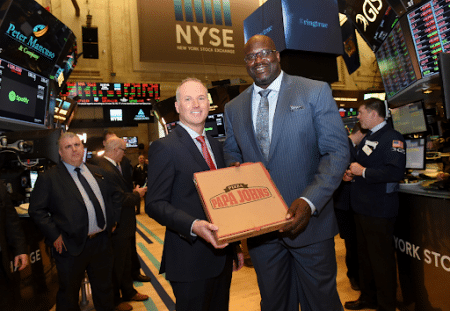 O’Neal also owns eight Auntie Anne’s pretzel shops in Buffalo, New York, and nine in Michigan, having also splurged big on Five Guys. He owned 10 percent of the company’s portfolio at one point, which translated into 155 restaurants.

While he’s known to love his food, The Diesel is also into fitness and has 40 24-Hour Fitness gyms across the country, as well as a movie theater in New Jersey.

Shaq is the owner of 150 car washes too. But one of his most profitable investments came in the form of Google stock when it was pre-IPO. He lucked out with this one as it kind of happened by accident.

“I’m actually babysitting the guy’s kids while he’s in a meeting,” O’Neal said on the Ellen Degeneres Show. “So after the meeting, he says, ‘You know what? You’re good with kids, I like you, I’m going to bring you in on this investment.’ And it was called Google. He said, ‘You know, in the future, you’re going to be able to type on your phone, search engine this, do this, boom, boom, boom, you should invest.’” 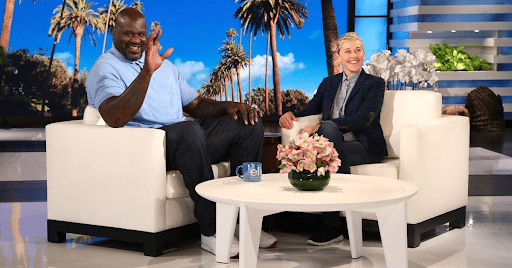 He invested in 2004 and, while it’s unclear how much he bought, he notes it made him a huge return.

Shaq has revealed that he only invests in businesses that provide products and services which he likes. He’s also associated with Icy Hot, Carnival Cruises, Fruity Pebbles, Zales, Arizona, and Gold Bond.